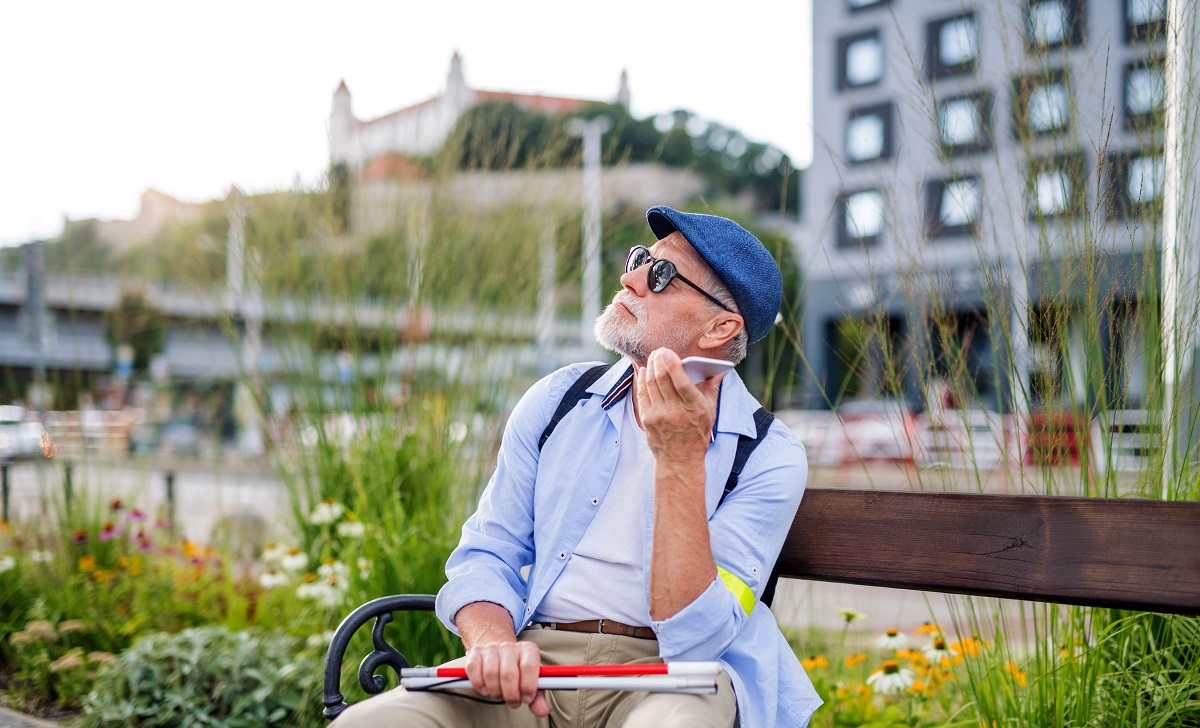 During the pandemic, as blind people, like everyone else, were increasingly dependent on websites to purchase goods, one of the fastest-growing companies that help companies like Oreo cookies and Energizer batteries make their websites more accessible has been fraught with conflict with blind people. Blind people say its product makes it difficult for them to navigate the web.Recently, blind people and disability advocates have taken to social media to protest AccessiBe-using companies. They say AccessiBe, which is supposed to automatically make websites compatible with the screen readers blind people use to access the internet, has prevented them from engaging in all sorts of ordinary activities online, such as paying rent, teaching a class or shopping for Christmas gifts.

AccessiBe is the largest automated accessibility company on the market, according to Lucy Greco, who is blind and the director of web accessibility at the University of California, Berkeley. Over 400 blind people, accessibility advocates, and software developers signed an open letter in the past two months calling on companies that use automated services, like AccessiBe, to stop.“We will not remain silent when overlay vendors use deceit to market their products,” the letter said.

AccessiBe’s website describes its service as a $49-a-month tool that helps companies comply with the Americans with Disabilities Act by adding a line of code to the backends of websites. AccessiBe also offers support for websites that are sued and claims to bring them into compliance. Some 132,000 websites use the company’s software, including brands like Pillsbury, Benadryl, Playmobil and the Los Angeles Lakers, as well as government agencies like the Louisiana Department of Health and the state’s Department of Public Safety and Corrections. In February, AccessiBe announced it received $28 million in funding from a private equity firm called K1 Investment Management.

While the company has celebrated its growth and funding in press releases and blog posts, many blind people and disability advocates on social media say they have experienced problems when trying to use sites that have installed AccessiBe. Some of those websites have rendered some of the websites they used to use unnavigable, as they say screen readers can’t read the pages correctly and can’t read image descriptions and menus.“If a consumer comes into difficulty or problems with these sites, the site owner can say, ‘Hey, we comply with the accessibility guidelines. So you have no case’” to sue, said Steve Clower, a blind software developer who specializes in accessibility.

Clower said he had to ask a friend to help him write his rent check that month after his apartment’s rent payment website adopted AccessiBe last summer. The experience was so frustrating that Clower published a guide to block AccessiBe that he named “AccessiBe Gone.”“We understand there can be a learning curve for users,” Roy Gefen, chief marketing officer at AccessiBe, said in a statement, adding that some users have been confused by how AccessiBe works. The company has also created a dedicated team to receive customer feedback, he said.

But when blind users pointed out these issues in detailed blog posts, YouTube videos, and on social media, some say the company called their critiques “hostile” and often invited those who raised concerns publicly into closed meetings with the company’s CEO, Shir Ekerling.In an email, Ekerling said people who criticize the company online are largely stirred by “thought leaders” who are rallying blind people in a “huge campaign” against the company with few specific critiques.

“Almost no one gives any specifics to actual websites that really don’t work for them,” Ekerling wrote in an email. “This is because they don’t really test us, nor have really used us. At most, they went on a website out of anger and didn’t even try to understand.”Gefen said he believes some pushback is expected for new technologies with new ways of doing things, “especially from professionals within the industry who directly compete with AccessiBe.”There are many products that claim to provide an automated, quick way to conform websites to accessibility standards. AccessiBe is just one of them.

Greco, at the University of California, Berkeley, said other companies have similar products that have many of the same technical issues AccessiBe does. But AccessiBe stands out because of its rapid growth, heavy marketing and defensive style of engagement with blind people who claim it hasn’t worked for them.“I think the thing that’s gotten people mostly on edge is that the marketing makes us into the bad guys instead of users who want to use a website’s services,” Greco said.

“Accessibility is really a matter of inclusion or exclusion. Are you planning to include disabled people on your website or are you planning to exclude them? That’s why it’s a civil right,” said Lainey Feingold, a civil rights lawyer who has worked on digital accessibility since the mid-1990s, including the first U.S. settlements that made ATMs talk and pedestrian signals audible. “The whole idea of disability rights is about disabled people participating in society, and in 2021, without digital accessibility that participation is impossible.”

People have cited AccessiBe in at least two recent lawsuits claiming that the websites do not comply with the ADA, including one against an eyeglasses company called Eyebobs.

In that case, the plaintiff used testimony provided by Karl Groves, an accessibility auditor, software developer and expert witness in the case. He analyzed 50 websites that use AccessiBe and testified that he found thousands of problems on the sites that could interfere with their compatibility with screen readers. That lawsuit was referred to mediation last month. Court records show that the company denied any transgressions.

Court records indicate that Masterbuilt Manufacturing, a grill company, settled the other case, followed by a voluntary dismissal in March.Ekerling, the CEO, said in an email that he works with companies every week dealing with accessibility legal issues to help them become compliant. AccessiBe denies that Eyebobs and Masterbuilt Manufacturing were using its product at the times identified in the lawsuits.In framing its web accessibility program as a way to avoid lawsuits, the company hasn’t helped its relationship with blind people.

It capitalizes on this fear that disabled people will sue you and make life difficult for you,” said Holly Scott-Gardner, a blind person and disability rights advocate who raised concerns on Twitter and on her blog about how AccessiBe didn’t work for her. “It furthers this really horrible view of disabled people, that we are just out there for money, using our disabilities just to get money.”

The National Federation of the Blind in New York has invited Chancey Fleet, who is blind, to a private meeting with AccessiBe executives after she tweeted concerns in February.In leaked audio of the meeting obtained by NBC News, Ekerling said disability advocates and his company share the same goal of making the web more accessible and that their voicing their concerns about AccessiBe’s functionality was a “demonization” of the company.

“‘Demonization’ is not a term that I feel comfortable with,” Fleet said. “I’m talking about collective harms that occur.”In an email, Ekerling said AccessiBe listens to its critics and has hired people who provided feedback to join its accessibility testing groups. He also said, “We employ many people with disabilities (most of them are blind).”

For now the problems between AccessiBe and users of its tools only seem to be growing more contentious — especially because blind users say they can’t escape its omnipresence in the visually impaired community.Haben Girma, a civil rights lawyer and author who is deaf and blind, said she had problems using AccessiBe’s own site when she visited it in March. She The company’s ads are everywhere, which makes AccessiBe stand out from other companies that offer automated solutions for ADA compliance.

“They have spent a staggering amount on advertising,” Girma said. “Seeing these ads online feels like a personal attack on my humanity.”

Among the fears that many in the visually impaired community shared is that screen readers will prevent blind people from using the internet.Amy Mason, a technology instructor at the Lighthouse for the Blind and Visually Impaired in San Francisco who is blind, said she first encountered AccessiBe at the end of last year when teaching a student how to use screen readers, visiting a website where they could shop for gifts around Christmas. When they got to the website with AccessiBe, every few seconds it kept prompting them to enable AccessiBe’s screen reader mode.

“And every 30 seconds, my student, who was new to screen readers, was getting completely thrown back to the top of the page. We couldn’t access the site because this was screaming at us the whole time,” Mason said. When they did enable the screen reader mode, Mason said all the headings that organize a website to be read back to blind people had fallen out of order.

Mason complained about her experience on Twitter, and in response AccessiBe invited her to watch a demonstration of the product by Ekerling, which she declined. The company said it has since fixed the issue with the repeated prompts to enable accessible.“As an expert, for me, most of these sites are going to be kind of annoying,” Mason said. “For my students, it might just be an end game, where they just can’t access that website or that service.”

Wondering how you can use these trends for your business? Reach us now. Our team of experts will guide you through the end-to-end process.