At CES, there’s no shortage of gadgets to talk to. Smart TVs, cars, pianos – and even a toilet – these are just some examples of devices that come with voice-activated helpers.

No matter who makes the hardware, the virtual aide linked to or packaged inside is likely to be one of two: either Amazon’s Alexa or Google Assistant.

For ShadeCraft, the maker of a new device that lets garden parasols be controlled by voice, Alexa was simply more straight-forward to build in.

“It was much easier and simpler to integrate,” explains chief executive Armen Gharabegian. “But we have been testing Google voice as well.”

Users can ask Alexa to open or close the sunshades mechanically, or play music via Bloom’s speakers. But ShadeCraft wants to integrate Alexa completely, so that the parasol behaves just like an Amazon Echo smart speaker.

Voice commands such as ordering Amazon products or asking what the weather will be like could then be done from the patio as well as the living room.

Amazon has made it hassle-free to add Alexa to products, by offering the assistant on a single chip – the Alexa Connect Kit.

It has been available for a few months now, but at CES Google just announced their equivalent tool with a strikingly similar name – Google Assistant Connect.

However, any product using that chip will have to wirelessly connect to a Google smart device, which will process voice data.

The benefit of this would be to give users access to the particular functionality offered by different virtual helpers.

Google Assistant, for example, tends to be better at answering queries about the wider world than Alexa. It also has exclusive access to some of the search firm’s other products, letting users control Chromecast audio streams or display YouTube and Google Maps on devices with screens.

Alexa, by contrast, is more widely supported by third-party products and has more apps.

Another firm that thinks its customers may be best at deciding how to interact verbally with its devices is Sonos.

It has shown off a prototype smart speaker that allows users to select either Alexa or Google Assistant, though it isn’t possible to activate them both at the same time.

Part of the problem is that interacting with multiple virtual helpers through one device could get confusing.

“Say an alarm goes off on the speaker,” writes Dieter Bohn at tech site The Verge. “You might not know whether it was Alexa or Google that set it off, and you’d be stuck guessing which one to ask to stop while it beeps.” 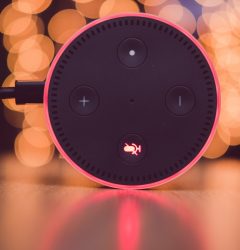 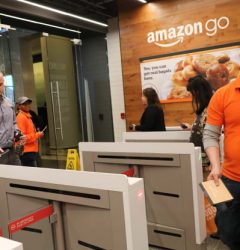 Amazon reportedly wants to turn your hand into a credit card